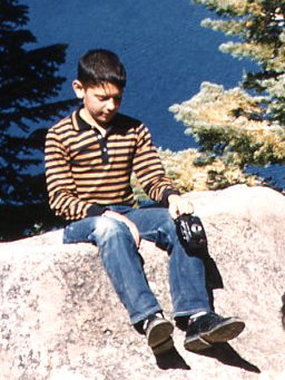 photo by unspecified Strauss family member
﻿﻿Dave has been a photographer since childhood. The photo at left shows Dave sitting on a big rock beside a lake (probably Tahoe) at about the age of seven, with a Kodak Brownie camera dangling from a strap around his wrist. This historic image was discovered in an old metal candy box along with many other poorly exposed and out-of-focus travel photos. There were images of two-lane roadways receding into dusty red rock canyons, a parked Ford station wagon with modest mid-50s tail fins, puzzled children, each shading his/her eyes from the sun with one hand while waving vacantly with the other, and three state border signs, all with bullet holes that say respectively “Welcome to Utah”, “Welcome to Nevada” and, most prized by collectors, “Welcome to Idaho” with far more bullet holes than the others.

The youngest of three children, Dave enjoyed more freedom than most and often wandered around the woods adjacent to then quiet and modest San Rafael in Marin County, CA.  He was fascinated by bugs, snakes, trees, squirrels, rabbits, spiders, and lizards, so he watched them carefully during his solo expeditions and occasionally caught a spider, a lizard, or a snake and brought it home. The unlucky creature would be remanded to a box or a jar along with some weeds, sticks, dirt, and the very best intentions.  Snakes and lizards, assigned to a Genuine US Keds shoe box, often escaped into the random junk on the floor of ﻿Dave’s closet. 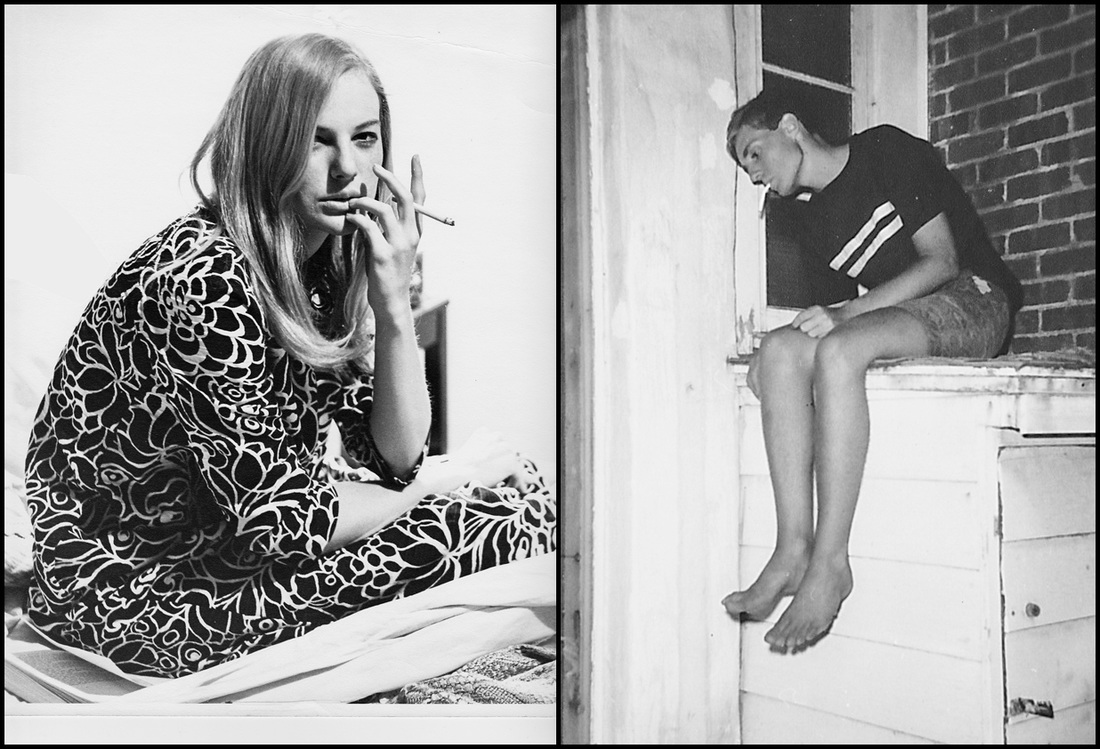 Cigarettes were a key indicator of serious artistic intent. (photos from 1966-1967)

In high school, Dave took what he thought of as ARTY pictures of his friends with a twin lens reflex and flash-bulbs. Meanwhile, across the Richmond Bridge, his enterprising older brother Phil ran a small photo business from his dorm room at UC Berkeley and hired Dave to take souvenir pictures of inebriated couples who posed on a hay bale or some other corny backdrop at periodic undergrad bacchanalia quaintly known as “dances”. These events were Dave’s first experiences as a paid photographer, and an excellent opportunity to observe, at close range, many absorbing details of college life.

So it was no surprise that Dave would follow his brother and sister to the University of California at Berkeley in 1966. Like most directionless freshmen, Dave considered many majors -- actually, all of them.  Although the General Catalog was a very thick book, he carefully analyzed every page and briefly considered his brother’s major, Electrical Engineering. No doubt that would have been a fine choice, leading to a fascinating and lucrative career.  However, "EE" mandated a daunting burden of math, physics, chemistry, and other classes that required, well, STUDY, so he eventually chose art and design. Dave surmised, correctly, that ﻿self-expression ﻿would be a gentler path to graduation than actual subject matter.
﻿﻿
UC Berkeley from '66-'70 was an excellent place to spend one's transitional years. Tumultuous political and cultural events flowed in a dizzying, non-stop torrent. It was a disturbing, exciting, and illuminating period. MEANWHILE,  and speaking of illumination, photography consumed rapidly increasing DS mindshare. Dave acquired three cameras: a Yashika MAT medium format twin lens reflex, a Miranda 35mm single lens reflex, and a Speed Graphic view camera. He shot hundreds of rolls and hundreds of sheets of film, spent uncountable hours in the Wurster Hall darkrooms, learned to blow glass, dressed very strangely, welded, painted, sculpted, studied photography, acquired and restored old motorcycles, and began to be drawn toward the idea of being an ARTIST. OK, but who’s to say he wasn’t? Even being a POSEUR was attractive, considering it was a French word. He got occasional gigs doing event photography, most memorably photographing the notorious Bruno Bettelheim for the University of Chicago, where he was faculty at the time. He even photographed a friend who was becoming a fashion model and needed some pictures for her portfolio. 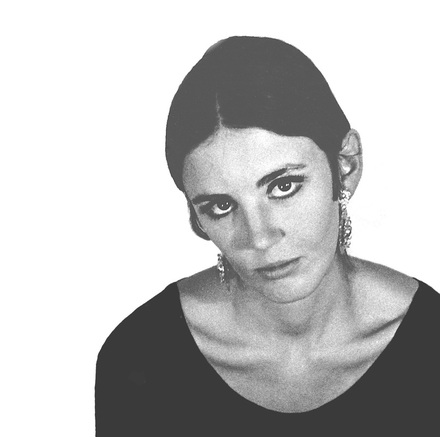 Then, an emerging fashion model; later, a Professor of Anthropology (about 1967)

A serendipitous job opportunity after graduation led to training as a computer programmer and decades of subsequent work in high tech as a software designer and later as an executive at companies ranging from Silicon Valley venture-funded startups to Fortune-500 companies such as Litton Industries, Lucent Technologies, and Motorola. For Dave, photography necessarily faded, but persisted in the background for many years.

(Now please visualize the "time goes by rapidly" montage﻿﻿﻿: Calendar pages are blown away in a strong breeze, spinning newspaper front pages show famous headlines of the 70s, 80s, and 90s, still photos in black & white show wistful scenes of of life rushing by;  the river of time, flowing...)


PHOTOGRAPHY GOES DIGITAL
Fast-forward to the Millennium, year 2000, "Y2K", the year when all civilization was expected to collapse because programmers during the 70s (including Dave himself, then working as a programmer at the Bank of America computer center) didn't provide for 4-digit years in their programs and file structures. (e.g., 1972 was stored as '72', not '1972') Who knew that these programs would still be running 25-30 years after they were written? The dire forecast: all banks, insurance companies, utilities, hospitals, government agencies, wholesalers, retailers, butchers, bakers, and candlestick makers would collapse at 12:00:01 AM on 01-01-2000 in an apocalyptic white-hot lava flow of zeros and ones as the computers of the world erupted in a cataclysm of logical frustration, unable to compute the date rollover from '99 to '00.  In fact most institutions were well prepared and nothing much happened.

2000 was also the year when relatively high quality DIGITAL PHOTOGRAPHY became practical and accessible at a reasonable price. Dave, feeling some of those old photographic yearnings, bought  the excellent KODAK DC 280, a 2 megapixel camera equipped with a pretty decent 2x zoom lens, 8 MB CF memory card, and a USB port.  Wow. (Note to camera collectors: A DC-280 can be found today on eBay for about $12.)  This was indeed 'the Millennium' for photographers who were open to the absolutely incontrovertible and mind-boggling advantages of digital photography over chemical photography. For photographers without dedicated studio and lab space, it was no longer necessary to re-purpose the bathroom or kitchen for weeks at a time. (Yes, there are still diehard film-and-chemical photographers out there today, and plenty of vendors to sell them film, paper, environmentally awful chemicals, and all the other crazy products that are relics of a charming but fortunately bygone era. Please, do not get Dave started on the subject of chemical photography; he really goes off.  ALSO: It's best not to mention fax machines, either.)
With all the benefits of digital  (e.g., no film or chemical costs, instantaneous viewing of results), Dave started taking more pictures and steadily upgrading his cameras, lenses, and other photo equipment. In 2008, he bought a Canon Digital SLR, sold his last remaining film SLR (bye-bye, no regrets), and was on his way to becoming a hard-core photographer once again after a long hiatus.

Today, Dave is a photographer specializing in studio portraits, editorial photography, tabletop/macro, wildlife, and scientific images. He is also a graphic designer and publisher of his images in a variety of formats. His photographs are shown in individual and group exhibitions, and published in general circulation magazines, academic journals, books, and websites.